SMELL:  Spicy pleasant smell that is both fresh and rich in pungent terpenes.

CREATED FEELINGS: The high created from Jack Herer is about as wonderful as a Sativa gets. The first hit pumps your body full of energy and leaves you ready to take on the world. One of the most productive feeling highs on the market, you may finally get around to cleaning your kitchen. Jack Herer also has very little “coming down” effect making it a great daytime smoke.

Jack Herer is easily one of the best-known strains in America. Originating in California, this sativa honors the memory of Jack Herer the man, a longtime local cannabis activist and medical marijuana user.
It’s not quite as strong as its popularity might suggest, but the high is heady and distinctive. Jack Herer has a unique loamy smell and taste with hints of pine and trees.
The sativa high is happy, bubbly, and euphoric, spurring energy and creativity. Jack Herer is ideal for errands and other daytime activities. This strain is effective for patients with mental or neurological disorders, including bipolar disorder, anxiety, migraines, PTSD, and ADHD.
Dry mouth and red eyes are common, along with occasional dizziness and paranoia. Jack Herer is popular throughout the United States, but, like many other strains, it’s most popular in the West. 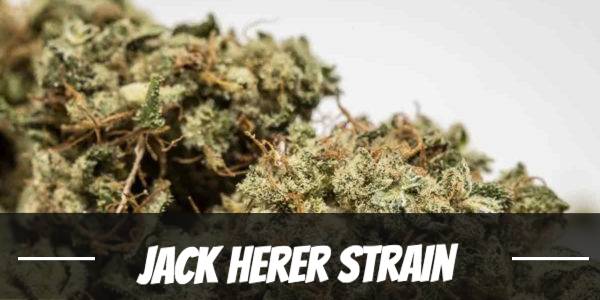 The Jack Herer strain is a sativa-dominant strain named after the legendary cannabis activist and best-selling author of The Emperor Wears No Clothes. An all-round happy, clear headed high, it makes for a suitable homage to the real Jack Herer, often described as “the perfect blend”, earning itself fans world-wide.

This famous strain was created in the mid 90’s in Holland, where it was bred and cultivated as a medical-grade strain. Its distinct engineering made the use of a sativa Haze hybrid, mixed with indica Northern Lights #5 and the Shiva Skunk.

Its uniqueness doesn’t just lie in its genetics, but also in its soothing, happy personality, which shines strongly in its effects. Jack Herer also does great justice to its name by being a very powerful healing aid for patients suffering from an array of ailments, both mental and physical.

Because of its strong sativa presence, Jack Herer creates a very vivid, happy high. It is popular for the fact that it can be uplifting without feeling overpowering, and you can easily find yourself centered and relaxed after a few puffs.

Instead of it being a dowdy downer, it generates an energetic buzz that is guaranteed to fuel on a good time. Jack Herer is well known for its cerebral high, mixed with a mellow, light body high, carefully avoiding a solid couch-lock.

A sense of euphoria can also be observed when smoking it, and comes highly recommended as the perfect start to a creatively stimulating and social night out.

Jack Herer’s scent is said to be reminiscent of pine and spice, creating an inviting appeal for everyone. Its smell also has a hint of orange juice and lemon in it, to break up the earthy base. Some say that Jack Herer can leave a delicious cake-like whiff in the air, mixed with a bit of pepper.

Much like what it smells like, Jack Herer also delivers an earthy, pine-like taste when smoked. Many have been quoted as saying Jack Herer tastes a bit like a tropical fruit salad, with a sharp, spicy saucy bite to it.

Jack Herer has a bit of earthy and spice as well as a hint of pepper, but boasts of a sweet, aromatic aftertaste. Plus, you can enjoy its happy high anytime of the day. Find seeds with similar properties in our online seedbank.

As is usual with stronger strains, one of the side effects of Jack Herer reported is that of dry mouth, often accompanied by dry eyes and a feeling of slight dehydration.

It also commonly can cause a mild anxiety and in some rare cases, paranoia. A dizzy sensation can be observed as well in those who might not be used to the strength and potency of this strain.

Many doctors prescribe Jack Herer as a morning medicine. It is perfect to aid those who suffer from any type of stress-disorders, anxieties and nervousness. Jack Herer is a powerful happy-smoke, and therefore a great choice for depressive people.

Because it causes a reliable boost of energy, Jack Herer can be used in the battle against chronic fatigue and lethargy. It delivers an enjoyable, slightly numbing high, that can help eliminate feelings of physical and emotional pain.

Another medical use for it is to cure chronic headaches and migraines. It is stronger than your average strain, as has been successfully used in providing a cerebral release, combined with a creative, happy release that is guaranteed to put you at ease.

two that lean indica and two that are predominantly sativa. Outdoor growers should plant in Mediterranean-like climates that maintain daily temperatures between 72 and 80 degrees Fahrenheit.

Because plants can reach heights of 8 feet in certain conditions, indoor growers should be sure to curb the height of Jack Herer by topping and by flowering soon after the plants take root.

Jack Herer typically has a lower than average yield. It flowers within a comparatively long 10 weeks when grown indoors and is ready for harvest in mid to late October.

One of the most grown and most respected strains around the world, Jack Herer Strain autoflower is a grower’s dream. Its fast flowering plants and high yielding characteristics truly embodies the quality it represents. It is resistant to many common diseases and easy to grow, making Jack Herer an absolute staple.

Jack Herer, when grown indoors, is known for its short flowering period, clocking in at an estimated 8-10 weeks on average. This strain produces around about 18 ounces per square meter.

In an outdoor setting, Jack Herer is best grown in a dry Mediterranean climate, and can reap about 18 ounces per plant. It typically is ready for harvest around late September to early October.

What is the Jack Herer strain yield?

How much THC does Jack Herer strain have?

What are the origins of the Jack Herer strain?

Jack Herer Strain was first bred in the mid 90’s in Holland, by using a sativa Haze hybrid, mixed with indica Northern Lights #5 and the Shiva Skunk.

Have you ever smoked or grown your own Jack Herer Strain? Please let me know what you think about this marijuana strain in the comments below.