Pineapple Express at its best! A super potent batch at an unbeatable price!

A Great strain for helping with creative projects. IT IS lights up your mind like firecrackers! get ready for a high so good, they made a movie about it...not Rogen’s best, but a goodie. No one can top Superbad…

Pineapple Expres is one of the best strains of all time, if you haven’t tried it, or it’s been ages, buy it now! Fall in love all over again.

About this Hybrid Strain

Pineapple Express is a hybrid cannabis strain that tastes tropical, with a pineapple appeal and undertones of spices and cedar. When harvesting ready, this strain produces dense light green buds with slight purple hues.

Its THC content usually averages between 12-17% and doesn’t get much higher than this. Despite its acclaimed psychedelic stardom from the stoner movie “Pineapple Express,” its high is actually on the milder side. However, consumers enjoy its softer cerebral effects that increase creativity, can break through writer’s block, and increase social inventiveness while also inducing a light body buzz the relieves mild aches. Focus and awareness are often heightened. This is a lovely strain for consumers that are entering the cannabis scene.

The most notable ill side-effect is dry mouth, with some claiming it also creates dry eyes. While more unlikely than not, some have reported slight bouts of paranoia and dizziness that occurs when consumed improperly.

Flowering time for Pineapple Express is between 7-8 weeks and is most potent when “super cropped” (bush style growing: using lights of 600+ watts and topping the plant).

Pineapple Express derives its name from its parent lineage – a cross between the hybrid Trainwreck and native Hawaiian.

According to actor and comedian Seth Rogen, the Pineapple Express cultivar didn’t exist until after the 2008 movie of the same name brought the name into the spotlight. Inspired by the film, growers took it upon themselves to create a potent cultivar that the film described as “the dopest dope.”

G13 Labs claims it originated the strain in the mid-2000s, selecting Trainwreck and Hawaiian as parent genetics, and the hybrid soon proliferated among California medical marijuana dispensaries. However, many gr

wers and 11 seedbanks each aimed to create the “true” Pineapple Express. As such, multiple variations exist in the current marketplace. 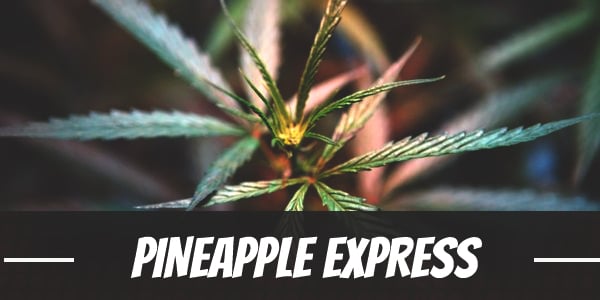 Nonetheless, Pineapple Express is still all the tropical sensation both its name and reputation suggest. The strain provides a potent and long-lasting and enjoyable high and is most notable for its lightness and easiness of navigation.

Crossed by blending a high-grade Hawaiian strain with Trainwreck, Pineapple Express turned out a smooth, energizing hybrid. Its international fandom is well-deserved. The strain is a reliable tropical delight, without the heavy body high.

Its parentage guarantees a strong a solid high, allowing you to stay in the clear while enjoying a long-lasting creative surge. This means Pineapple Express has quickly become a favorite among those looking for an inspiring afternoon of creating and a full-on focused cerebral experience.

A guaranteed feeling of happiness will creep in on you when you smoke Pineapple Express Strain. Unlike what its namesake film suggests, there is nothing extreme about this strain.

Pineapple Express Strain is a smooth criminal, that will leave you feeling joyous and uplifted, and ready to go about a full day with much gusto. You will feel a sense of euphoria and a boost of energy from this popular strain. It is a definite mood-lifter, often leading creative types to come up with exceptional and unexpected ideas.

Pineapple Express Strain can relax you without making you feel sleepy or tired, making it the perfect daytime toke. It will keep you in a blissful mood, with a bit of daydreaming and laughter to keep you on your toes.

The fragrance of the Pineapple Express Strain

One of the reasons why Pineapple Express is so popular is because of its distinct pineapple aroma. This is very noticeable especially in tight settings so you might want to watch out for your neighbors if they can be slightly nosy.

Pineapple Express Strain boasts of a certain earthy-fresh fruity smell that is wildly invigorating and appetizing. It does justice to its name by truly representing the famed pineapple scent that embodies its Hawaiian heritage.

Staying true to all things pineapple, this strain tastes much like it smells. Pineapple Express has a cedar and pine flavor to it, mixed with a sweet tropical vibe. It is said that it leaves a bit of sugary aftertaste in your mouth, reminiscent of fresh mangoes and of course – pineapples.

While many other sound can out-do Pineapple Express in terms of potency, this strain maintains its popularity by being one of the tastiest varieties available on the international market. Its flavor is renowned for being unique, and largely unrivaled by its peers.

Because Pineapple Express isn’t such an extremely potent strain, unlike its reputation suggests, its adverse effects are kept quite a minimum. Dry mouth and dry eyes can be observed at times, with a feeling of dehydration being the most prevalent negative effect.

Sometimes Pineapple Express can make someone feel slightly paranoid, especially when consumed in copious amounts. Very rarely one might feel a slight bout of anxiety, leading to possible dizzy spells and nervousness.

One of the reasons why Pineapple Express is an ideal strain to be prescribed to those in need of medical relief is because it is a balanced Sativa-dominant strain. It heals without creating heavy side effects.

Among the many medical conditions Pineapple Express can ease, stress-control is quite likely to be the one it is most popular for. It’s ability to calm down the nerves without slowing down the mind in a heavy manner, makes it an effective stress-buster.

The strain is proven to be quite useful in combating other mood-disorders such as depression and anxiety, but is also a powerful pain reliever. Those who suffer from debilitating and chronic pains will benefit from the use of Pineapple Express, often being able to do day-to-day activities that they have not been able to do due to the extreme pains.

Pineapple Express seeds were at one point quite rare and difficult to find. It is a high-grade strain that yields quite generously. It is notably easy to grow and has a naturally high resistance to common diseases and molds.

Growing Pineapple Express indoors means that it flowers in a relatively short amount of time, taking an average of about 7-9 weeks to be ready to be harvested. It is a generous strain and yields an estimated 18 ounces per square meter.

October is the best time for a harvest when it comes to Pineapple Express grown outdoors, with mid October being the prime time of the month for this strain. It is estimated to yield around about 19 ounces per plant.

What is the Pineapple Express strain yield?

How much THC does Pineapple Express have?

What are the origins of the Pineapple Express strain?

Pineapple Express was created from a mix between Hawaiian and Trainwreck strains.