As the Californian weed legend says, Fire OG Strain has been voted to be the strongest of the OG strains. Genetic parents are San Fernando Valley OG Kush F3 and OG Kush, hence the fiery appearance of red glamourous hairs growing on frost covered nuggets. Fire OG hybrid is truly a successful strain, providing you with up to 20% THC and 0.36% of CBD. Weed growers report that flowering time is normally 9-10 weeks. How does it tastes like and how long does the effect last for? It has a distinct lemony scent just like the Lemon Pledge, which will work up to 3 hours. Highly recommended. Mmmm, lemonlicious…..

Fire OG strain marijuana gets its name because of its easy to recognize appearance. It has frosted covered nuggets with red hairs, making the plant appear to be on fire. This is one of the most powerful OG strains currently on the market. There is a significant bag appeal for consumers with this product, as it has an intoxicating feeling just from its scent alone, which gives major lemon vibes, and is a heavy hitter, even in small doses.

The Fire OG strain is classified as a hybrid, but it is an Indica dominant strain. It is 70% Indica and 30% Sativa. Because it is dominated by Indica, it is known to give consumers a powerful body high, which will most likely result in the consumer sitting for a few hours on the couch with their feet up.

When taking a hit, consumers feel a very balanced high, that is only related to that of a true hybrid, providing the best traits of both mental and physical feelings. The unique thing with Fire OG Kush is that its THC is not as high as some other strains, but it still packs one of the most powerful punches. Lab tests show that this strains THC content is generally between 15% and 20%. 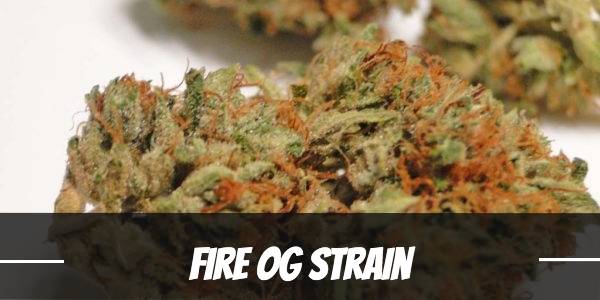 Fire OG is a super-hybrid that was created out of two potent OG strains. This strain boasts of a distinct sharp citrus flavor, that is both mouthwatering and invigorating, and only a hint at what’s to come. This hybrid is a very strong relaxant and is guaranteed to knock you out, veteran or amateur alike.

This legendary OG strain is renowned for being one of the strongest of the OG’s. This indica-dominant hybrid stems from its parent strains San Fernando Valley OG Kush and OG Kush, making it no surprise that this hybrid ended up becoming one of the most potent strains around.

Fire OG is a heavy-handed sedative, knocking all your stresses out of you and working wonders in keeping you locked on the couch. This hybrid is popular among those who are looking for the perfect wind-down after a long day at work, and is perfect for inducing sleep in those who have a hard time finding rest at the end of the day.

Fire OG is a perfect way to find relaxation after a stressful day. This strain has a high that will stay for a few hours, leaving you in a constant state of unwinding, and leaving all your troubles and problems far behind you.

Fire OG can make you delve into a pleasant state of euphoric, making you feel happy and smiling uncontrollably, and without needing a reason to do so.

For some, Fire OG will make them feel instantly energized until they sit down and start feeling the indica effects.

Fire OG is an uplifting strain that promises to keep you in good spirits. It delivers a very strong cerebral high that will make you feel sudden bursts of energy. This happy heart-racer will make you feel warm and fuzzy with the good vibrations, before it starts to make you sleepy and gets your read for a long night of restful slumber.

Fire OG is a pungent smelling flower that has gentle spicy noted to it. This hybrid can easily be recognized by its aroma, especially for connoisseurs. This OG hybrid has a herbal sweetness to it, with sharp woody undertones that make it absolutely unmistakeable.

This hybrid is not only a pleasant flower to look at, with its bright orange hairs that resemble fire, and gave it its name – this bud is especially tasty and flavorful with all the spicy variety. Fire OG tastes as pungent as it smells, and will most definitely leave a flavor that will stick to your tongue in all its earthy glory.

Fire OG strain is very potent, so if you are only an occasional smoker, you should be warned – this OG is a strong smoke, even for the most experienced users. This strain can cause dizziness in some users, which may also turn into a sudden bout of anxiety.

This hybrid may also cause a dry mouth, often accompanied with dry and itchy eyes and a feeling being slightly dehydrated. Fire OG can also, in some more extreme cases, make you feel very paranoid, especially if you are not used to the strong potency of this particular smoke.

Fire OG strain is a popular strain in the medical cannabis community. This hybrid is known to treat many ailments, especially anything that may be caused by chronic stress. This Fire OG strain is really effective at relaxing patients and also releasing the mental blockages that may be contributing to feelings of anxiety and stress.

This hybrid is known to have successfully treated more serious mental issues too, such as depression and insomnia, as it can help release the chemicals needed for the body to calm itself and become sleepy. Fire OG strain is especially useful to those who are seeking out the perfect nighttime smoke.

Fire OG has also become a popular strain for those patients who are seeking out methods to manage their chronic pain, such as migraines, back pains and joint aches. Cancer patients also can find relief in this particular strain due to its ability to induce a healthier appetite and rid them of their nausea.

Fire OG strain is a strain that is not recommended for beginner growers. This plant takes a bit of patience to grow, and needs a well-engineered space for it to thrive in. This hybrid can be very generous in its yield, and prefers a controlled environment indoors rather than to be outdoors.

Fire OG strain can be expected to yield an average of 14 ounces per square meter when grown indoors. This strain takes an estimated average of about 10 to 11 weeks to flower and be ready for a fruitful harvest.

What is the Fire OG strain yield?

How much THC does Fire OG have?

What are the origins of the Fire OG strain?